Coronavirus: Largest study suggests elderly and sick are most at risk

Health officials in China have published the first details of more than 70,000 cases of Covid-19, in the biggest study since the outbreak began.

Data from the Chinese Centre for Disease Control and Prevention (CCDC) found that more than 80% of the cases have been mild, with the sick and elderly most at risk.

The research also points to the high risk for medical staff.

It comes as a hospital director in Wuhan died from the virus on Tuesday.

Liu Zhiming, 51, was the director of the Wuchang Hospital in Wuhan - one of the leading hospitals in the virus epicentre. He is one of the most senior health officials to die so far.

Hubei, the province Wuhan is in, is the worst affected province in the country.

The report by the CCDC showed the province's death rate is 2.9% compared with only 0.4% in the rest of the country.

The findings put the overall death rate of the Covid-19 virus at 2.3%.

Officials said there were 98 new deaths and 1,886 new cases in the past day, 93 of those deaths and 1,807 of the infections were in Hubei province - the epicentre of the outbreak.

More than 12,000 people have recovered, according to Chinese authorities.

What does the study tell us?

The paper by the CCDC, released on MondayÂ and published in the Chinese Journal of Epidemiology, looked at all 72,314 cases of Covid-19 diagnosed across China as of 11 February, including confirmed, suspected, and asymptomatic cases.

While the results largely confirm previous descriptions of the virus and patterns of infection, the study includes a detailed breakdown of the 44,672 confirmed cases across all of China.

Some of the conclusions reached include the following: 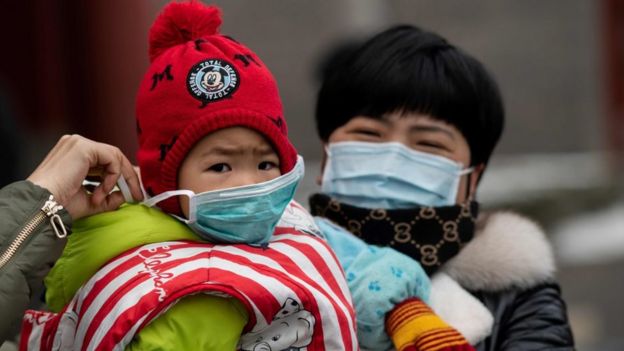 Pointing out the risk for medical staff, the paper says that a totalÂ of 3,019 healthÂ workers haveÂ beenÂ infected,Â 1,716 of which were confirmed casesÂ andÂ fiveÂ had died by 11 February, which was the last day of data included in the research.

On 13 February, China broadened its definition of how to diagnose people, including "clinically diagnosed cases" which previously were counted separate from "confirmed cases".

What does it say about the future?

Looking forward, the paper found that "theÂ epidemicÂ curve of onsetÂ of symptoms" peakedÂ around 23-26Â January before declining up to 11 February.

But the authors also warn that with many people returning from a long holiday, the country "needsÂ toÂ prepare forÂ theÂ possibleÂ reboundÂ ofÂ theÂ epidemic".

China's response to the virus has seen the lockdown of Wuhan - the largest city in Hubei - and the rest of the province as well as severe travel restrictions on movements across the country.

What's happening with the cruise ships?

The virus has spread beyond mainland China to countries around the globe and two cruise ships are now confirmed to have been affected.

The Diamond Princess was quarantined in the Japanese port of Yokohama on 3 February, after a man from Hong Kong tested positive. More than 450 of the 3,700 people on board have since become infected.

On Tuesday South Korea joined the list of the countries and territories also planning to get their residents out which already includes Canada, Australia, the UK, Israel and Hong Kong. 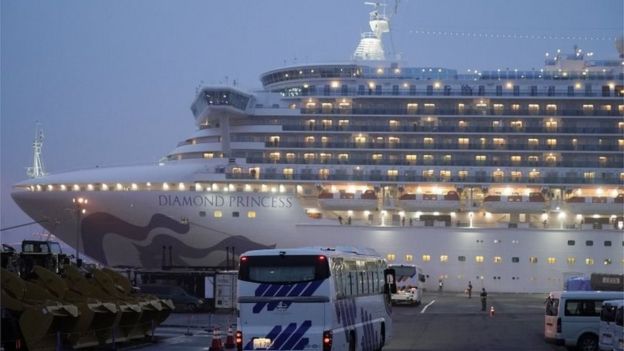 Image copyrightEPAImage captionAbout 3,700 people are quarantined on board the Diamond Princess

A second ship, the MS Westerdam was turned away by multiple ports around Asia over fears it could be carrying the virus.

It was finally cleared to dock in Sihanoukville, Cambodia, after no cases were found on board. Disembarking passengers were personally welcomed by Prime Minister Hun Sen. No one was quarantined.

However days later, a woman who had been on the ship tested positive after arriving in Malaysia. Huge efforts are now being made to track down the passengers, who have moved on to many different countries including Malaysia and Thailand, but also further afield to US and Canada.

Several countries have said they will not admit foreign visitors who were on the ship.

There are still 255 guests and 747 crew on board the MS Westerdam, while more than 400 passengers have been sent to a hotel in the capital, Phnom Penh, to await test results.